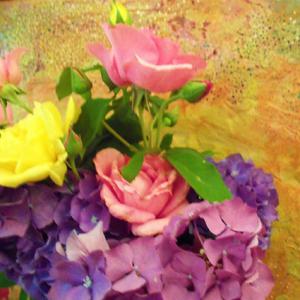 Considerations inspired by “The Blaue Reiter”1 of W. Kandinsky2 and Franz Marc3

Creative freedom is the goal of every artist and of every aware human being: “Art is, without any doubt, at the service of something, but not of real life. Art is at the service of the spirit, particularly today when the spirit is reduced to the functions of the last, fifth wheel of a chariot: time will come when art will be needed, too”.(W. Kandinsky – Answers to the interview on Gaceta de Arte4 ).  Freedom to believe, to think, to act and to create, in the respect of other people’s freedom, is, in any historical and social context, a constant aim of man – art often marked the peak of very intensely spiritual moments, as Kandinsky pointed out, “at the service of the spirit”.

Until today, particularly in the field of art, this spiritual nature’s motivation has very seldom been stably achieved: ideological and social situations kept banishing those artists who, due to their upright viewpoint and their spiritual yearning’s motivation, do not accept to conform to ruling ideologies adverse to spiritual freedom.

Today, at least apparently, there are no longer enslaved or dictatorships’ enthralled artists, yet we are facing a very interesting transposition: enslavement does exist, but hides behind refined varnishes trapping many men and artists (and their freedom to believe and to think), by means of rather subtle and elegant cunning, often presented as new thought or innovative cultural trends!

In fact, this phenomenon is but too visible and evident and, already in 1912, Kandinsky pointed it out in his essay on the understanding of Art (“Der Sturm” 129, october 1912:  “The spiritual world is dominated by two very old and forever young laws:

The evil enjoys that, he laughs – because those laws are the most beautiful flowers in his fetid garden”.

The world of the arts can therefore become an expression of spiritual enslavement manifesting itself in ignorance, arrogance, materialistic defeatism, opportunistic and servile dependence from patterns generally accepted, alienation, thirst for approval.

Moreover, this aberrant constant factor was clearly explained, already in the 4th century B.C., in the renowned “Myth of the Cavern”, in the seventh book of The Republic by Plato.

A rather interesting example of this “difficulty” in relation to the spiritual nature of arts can be found - to mention  but one example- in the catalogue of the exhibition “Wassili Kandinsky, between Orient and Occident” (ed. Artificio – 1993) where the reviewer J.E. Bowlt writes: “Certainly, the dimness of a concept such as ‘spiritual’ induces to easy speculations…” (sic-J.Bowlt - pag 19)

Possibly Mr. Bowlt did not even bother to look up in a common dictionary the definition of the words  ‘spirit’ or ‘spiritual’, and possibly he missed the etymology of these words: the dimness he talks about is not at all inherent to the words in question, nor it is inherent to the clarity and coherence of Kandinsky’s description. This dimness is actually inherent to a rather common difficulty – that is, lack of willingness and coherence in clearing and defining terms. This fact plays a rather interesting joke on Mr. Bowlt who, assuming to know, looks at life as from a window, as if life and Kandinsky’s works were not directly related to him.

Possibly, Kandinsky’s style and language may be – and are – subjective, nevertheless there is an objective truth that those dealing with the explanation and interpretation of Art should not neglect, namely – “Art is at the service of the Spirit”.

Reviewers are sometimes below a certain level of perception and, adopting a nebulous language, are hardly able to be in the same wavelength as the aesthetic and spiritual world of the artist (there are many such instances and we might call this phenomenon: “A cultural lag with Arts” and not just that…

Delacroix wrote: “Most writings on the subject of art are by people who are not artists, hence so many misconceptions”.

And again Kandinsky: “The ideal art critic is not one who would search for ‘mistakes’, ’errors’, ‘ignorance’, ‘plagiarism’, but rather one who tries to perceive the interior essence of this or that form, in order to attempt conveying his own experience to the public, vividly and effectively. Such a critic should naturally have the soul of a poet, since a poet must objectively perceive to be able to subjectively express his feelings. This means that the critic should be endowed with creative ability”. (The Blaue Reiter - W. Kandinsky and Franz Marc)

Always in a context of spirituality in the arts, here is another example. Klaus Lankeit in his notes to the “Blaue Reiter” writes:

“We are a generation apart from the Bauhaus5, almost sixty years from the Blaue Reiter6. We can no longer share the noble and courageous optimism of a faith in the advent of a ‘new era for the spirit’, nor in the mission of the artists to, first of all men, pull mankind out of the abyss with their works…”

Mr. Lankeit might have lost faith in the mission of artists, and, therefore, be unable to conceive that all that Kandinsky and many other artists dreamt, might ever happen. Here, unfortunately, materialism and urgency, ignoring the spiritual role of the arts, play a bad joke on Mr. Lankeit – a time deception: history shows that the elevated dream of another dreamer – Pericles, in the 5th  century B. C. –  only came true 2.500 years later!… one amongst many elevated dreams. If one were to talk of “spiritual jokes”, he would be right.

Culture is full of examples, very similar to the ones mentioned above, that show an impenetrable wall of prejudice, opinions and interpretations that transformed the arts’ universe into a hard to enter – not to mention to understand – Labyrinth, with art critics as its decaying Minotaurs

Apparently, an understanding of art requires that one, in the first place, goes through an indoctrination full of “isms” and “ists”, then wrecks in materialistic interpretations of history and, again, gets mired in the psychoanalysis’ swamp – at which point art becomes an hideous and confused subject: nothing but an economic sexology’s treatise on motivations and reasons why a painter would move the brush to the right while another one would move it to the left, or why romantic music is a prelude to experiments on rats!

One can go as far as paradoxically describing the artist as: “A strategic picklock for cheap Marketing and Public Relations actions”!

The worst happens when art is polluted by perverted trends, as in the case of psychiatry and psychology, that very often consented – and still consent – to act as propaganda and control devices. The damage inflicted by Wundt followers to the world of art is, indeed, incalculable. Art is very often to the psychoanalyst a gymnasium and an arena of psychopaths – with his “myths” he inspired a whole culture pretending to be artistic and modern while, in fact, turning theatre into a disturbingly neurotic happening.

In antithesis to the materialistic vision of art, here is another quote from Kandinsky and Marc: “A great era is beginning or, rather, already began: the spiritual ‘awakening’, the increasing tendency to regain a lost balance, the unavoidable necessity of spiritual sowings, the opening of the first blossoms. We stand on the threshold of one of the greatest eras ever experienced by mankind – the era of great spirituality. During an era that appeared to witness the strongest flourishing and the greatest victory of materialism – the only just ended nineteenth century – the new elements of a spiritual atmosphere that will furnish – and already did furnish – the nourishment necessary to the flourishing of spirituality started, almost unnoticed, to see the light.” (W. Kandinsky e F, Marc “The Blaue Reiter”)

Art must place itself in the future as the creative movement of new realities.

Mannerist reinterpretations of the past, attempts to emulate and reinvent models of others epochs, show but an inability to freely reach out to new universes, new horizons. But spirit has no boundaries.

The artist is often pressed by a request of models and patterns not belonging to his universe. His attempts to bring to life his aesthetic to divert him, enslave him, debase him. On the other hand, his language – not being part of a broadly accepted lexicon (status quo!) – is, very often, not understood. Trying to operate in a creative zone, the artist finds himself opposed by materialistic and consumeristic needs, and his spiritual strength withers on surrender.

Art is to me the aesthetic objectification of spiritual subjectivity.

The spiritual dream in art is therefore a sort of practical and creative disagreement – activity in a direction viewed as impossible.

Possible and impossible are but criteria connected to an agreement.

Art breaks old agreements and creates new realities: nothing is impossible to the spirit.

To close, a resonant quotation by Kandinsky:

“The world sounds. It is a cosmos of spiritually effective beings”. (Pier Paderni - Magisterludi)

1 Der Blaue Reiter [The Blue Rider] is a group of expressionists formed around Vasilij V. Kandinskj and Franz Marc. The movement, active in 1911 and 1912, influenced the Middle-European art by frequent expositions and the publication of an almanac “Der Blaue Reiter Akmanach” [The Blue Rider Almanac] collecting many of the group’s works and writings, and theorizing the presence of the spirit as an essential and basic element of the artistic language. The Almanac, along with the group’s artists works, presents children paintings, “primitive” people paintings and reproductions of oriental pictures and paintings. The Almanac, from 1911 but published  in 1912, was re-edited in 1914. The group dissolved at the outbreak of World War I.  “Der  Blaue Reiter” is also the title of a famous picture, painted by Kandisky in 1903 (before his shift to abstractionism) that represents, seen from the top and in “long field”, a knight in a blue cloak mounted on a white horse at gallop, who races across a meadow. The light of a Sun hanging low illuminates the run with suggestive shades that brightens the colours. According to the author, the painting wishes  to represent the knight’s abandonment of rationalist positivism, to go in the direction of the spirit.
2 Wassilij Vasil’evic Kandinsky ( 1866 Moscow, 1944 Paris). Expressionist, became one of the founders and main exponents of the abstractionism. He strongly claims – against the realistic representation – the deep spiritual value of the artistic work, that he views as an inner communication where colours represent the emotional keyboard (the relationship between figurative arts and music is very deep).
3 Franz Marc (1880 Muich – 1916 Verdun) one of the main exponents of expressionism. Kandisky’s partner in the “Der  Blaue Reiter” experience. Colour allowed Marc to infringe form, communicating his fantastic and spiritual view of art. Horses, painted in the strangest colours (blue, yellow, red) are one of his most recurring theme.
4 Gaceta Del Arte An international monthly art and cultural review that was published in Tenerife, Canary Islands, from February 1932 to June 1936.
5 Staatliches Bauhaus (Bauhaus) architecture, art and design German school. Active from 1919,  first at Weimar, then at Dessau and finally  at Berlin until 1933 when it was closed down by the social nationalism. The work of the avant-gardes and of the artists who taught or studied there, still influences modern or post-modern art . The Bauhaus has been the heart of the debate between technology and art or, more broadly, culture and gave rise to various current courses.
6 See note 1.