With the support of Stella Saglimbeni and Andrea Ortu in 1990, Pier created the Saturday's Concerts Season taking place monthly in the Salone dei Frammenti of his home in Novara. The purpose was to meet artists, share creative ideas and dream new realities as well have opportunity to have a rehearsal berfore important concerts having a good audience and this way they became an important and well desired moment with partecipation of art lovers and different publics. Here, in this season concerts, took place the planning and exploitation for most of concerts at the Arts Festival "Sui Sentieri della Fantasia" ("On The Paths of Fantasy") of Monteisola. The success of this artistic initiative immediately involved the Arts Atelier of set designer Domenico Franchi so the season concerts had also another location there in Camignone (Brescia). This way the artists after performing for the public of Novara and Milano would also perform for public of Brescia and Bergamo. This concerts became an eclusive success thanks to very great performers, italians and from abroad, such as pianist and composer MARIO FENINGER, classic guitar concertist MARIA VITTORIA JEDLOWSKY and CLAUDIO BALLABIO, flutist ANDREA ORTU e EMILIO VAPI, pianist PAOLO RUBERA, SILVIA SALVADORI, MARIA ANSALONE, SILVIA LEGGIO, PAOLA PIASENTIN, LOREDANA METTA, MARCO BIANCO and PATRIZIA URSO, the MILANO ENSEMBLE quartett and MAURIZIO SCHIAVO, singers KARIN WOLF, DANIELE CUSANI and SIMONETTA ARTUSO, JEDLOWSKY QUINTETT. Being an initiative rather unusual and inspired to the atmosphere of 18 century artistic lounges even the media prompted their attention circulating the project even if it was a private on invitation action. And most of all this has been an extraordinary moment for melting together into actions and creations the message of Arts Festival "Sui Sentieri della Fantasia". It is therefore a pleasure to acknowledge all the people who contributed to this magnificent project as performers, organizing and excellent audience. Thank you!

The pictures tells the story 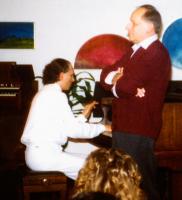 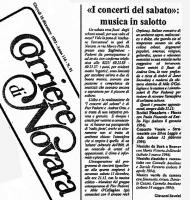 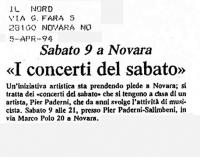 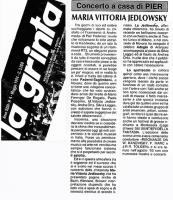